Today's speaker was Wayne Brodland, a Professor of Civil Engineering whose specialty is the mechanics of living tissues. I've encountered his work before, and was impressed. And he is - as are all the speakers in this series - an award-winning teacher.

Prof. Brodland asked, "How do we collect data?" He showed a slide that looked something like this: 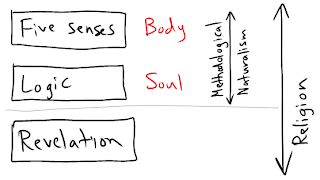 We collect data through our senses (and related instruments). For this, we use our bodies. We use logic, which he attributes to the soul (though he conceded that the brain is involved). The vertical arrow labelled "Methodological Naturalism" indicates which types of data are acceptable in science.

He said we also get data from revelation, through the Bible. He says this gives the religious an additional source of information, an advantage. Does that mean that religious people have the upper-hand on truth and reality? Not so fast.

He offered three lines of evidence in opposition to the null hypothesis: the empty tomb, witness accounts, and the changed attitudes of Jesus' followers. All of the arguments were based on assumptions as tenuous as the hypothesis itself: reports that people saw Jesus after his death, the alleged absence of corrections to the story, the motivation of the Jews to keep the body in custody, the choice of the disciples to continue Jesus' teachings even though it exposed them to horrific treatment. He said these all refute the null hypothesis. Hence, Jesus most likely rose from the dead. QED

During the question period, I (again) brought up the point that witness testimony is well known to be problematic (many people claim to have seen Elvis after his death). The truth of these Bible stories relies heavily, HEAVILY on witness testimony. Moreover, it is obvious that motivated theologians could have contributed their own spin in the intervening centuries.

Prof. Brodland answered that the current gold-standard for evidence in the court room is witness testimony. He said it's the best evidence we have. I disagree. Eyewitness testimony should NOT be the gold-standard. Physical evidence (DNA, fingerprints, textile fibers) is more objective and quantifiable.

Wayne shared with us a story of when he suddenly lost his hearing, and the doctors didn't know why. He told us the doctors expected it was due to neurological damage, and would not improve. Prof. Brodland and his friends prayed for his hearing to return, and after some time it improved. Wayne's conclusion? God fixed his hearing. This is an excellent example of the correlation vs. causation logical fallacy. They prayed, then his hearing returned.

I was going to challenge Prof. Brodland on this interpretation, but Jeff Shallit beat me to it. And a good thing... amazingly, Jeff said that he had a very similar episode of hearing loss. The doctors didn't know the cause. But his hearing came back... even though he didn't pray. Spontaneous remission does occur. (read Jeff's perspective)

Prof. Brodland said that he didn't know Jeff's medical history, but he knew his own. When Jeff tried to respond, Wayne cut him off and said, "It's a personal story, and that's just the way it is."

I can appreciate that losing one's hearing is traumatic. But I can almost guarantee that Prof. Brodland does not treat his religious sensibilities the same way he treats his lab. Confusing correlation with causation would get you laughed out of the peer-review process. It's an amateur mistake to make. And I expect Wayne would not tolerate it in his lab work.

Wayne repeated that personal experiences were strong pieces of evidence for him. For him. Well, what are we supposed to do with that, if it only applies to him? A subjective proof is no proof at all. It might as well be a story about gnomes and unicorns.

He said it's like grandma's cookies, you have to taste them to understand how good they are. I guess he's suggesting we all get hooked on heroine so we can understand, first hand, what is so compelling to turn good people into junkies. Who wants to go first?
Posted by Jeff at 12:26 AM