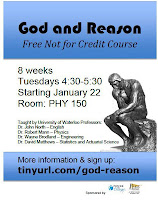 I found out about a free, not-for-credit "course" at my university (hat tip to Recursivity). The course is called "God and Reason", and it "explores and answers basic questions of the Christian faith from an academic point of view." I love this kind of stuff, so I signed up.

I just attended the first lecture. It was entitled "Doesn't Science Disprove Christianity?", given by Prof. Robert Mann, a full Professor in theoretical physics. His main point seemed to be that science addresses the "how" questions, while faith addresses the "why" questions. He made the comparison using these lists:


He said that while science and technology can give us cell phones, science is impotent to answer questions like, "Is it OK to use your cell phone in class?" Another example, scientists created the atomic bomb, but weren't able to keep it from doing harm.

He says science informs us of how the universe works, but faith undergirds the values from which we can make such ethics decisions.

I'm afraid I don't see it that way. I felt he was half right. Yes, science helps us to understand our world.

But what does faith have to offer in making policy decisions? During the question period I asked, "What if two different faiths contradict each other on a question of ethics?" His answer... they have to work it out just like things are worked out in science. Umm, that analogy has a problem. Doesn't "working it out" require that the two sides agree on a shared objective reality? Two dogmas in disagreement have nowhere to go - intellectually - except to retreat back to their sacred texts.

Then he pointed out that those people who set off suicide bombs are not necessarily scientifically stupid. Some of them are technically adept. Errr... I wasn't sure where he was going with that.

Prof. Mann talked about the big bang theory and how he felt it pointed to a loving creator. His notion of God was more congruent with a big-bang, created universe than an eternal universe.

But what about a God who created the universe 5 seconds ago, with all the stars in position, and all your memories implanted. That God is equally unfalsifiable. Ditto for the flying spaghetti monster.

That's the problem. Trying to glean knowledge from an unfalsifiable entity is an intellectual wasteland. It's really no different than "Superman can totally beat up Batman". Who's to say?

The climax of the event, for me, was when someone asked Prof. Mann if he desired a future in which quantum physics and relativity merged into a super-theory. He said "Sure!" without hesitation. Then, the same questioner asked if he would favour a future in which Christianity and Islam merged into an encompassing super-religion. I assumed the answer would be an easy "yes". But I was wrong. Prof. Mann was not so decided. But what shocked me was the reaction of the audience members sitting around me. There were snickers, and I heard someone derisively say "how?", and another say "No!" with a huff and a glance at his friends.

Really?! Is it easier to consolidate quantum physics and relativity than Christianity and Islam? It shows that this is not, at base, an intellectual exercise. It's an exercise in self-congratulation for picking the right religion.